The eight-day staggered lockdown in Shanghai – a city of 25 million people – and the lingering effects of the measure could shave up to 0.4 percentage points from China’s economic growth in the first and second quarters, per compared to a year ago, according to estimates by Liu Peiqian, China economist at NatWest Group Plc.

Restrictions targeting half the city at once will prevent city residents from leaving their homes, an attempt to curb China’s worst COVID outbreak since Wuhan in early 2020. It will likely hurt jobs in the sector services and will weigh most heavily on small businesses.

“COVID destroys people’s confidence and their spending expectations,” said Bruce Pang, head of macroeconomic and strategic research at China Renaissance Securities Hong Kong. He also pointed to the impacts on industries that rely on in-person and social gatherings, particularly the restaurant business.

Liu, whose first-quarter gross domestic product growth forecast is 4.7%, said the “gradual recovery” of the service and consumer sectors could take eight weeks.

As a major financial and commercial hub, Shanghai contributes 3.8% to the country’s GDP. It is also the second richest city, behind Beijing, according to the latest available figures from the National Bureau of Statistics.

Economists have downgraded China’s growth forecast for the year as outbreaks linked to the highly infectious omicron variant continue to spread. High-frequency indicators and company statements released so far suggest a likely temporary impact on factory output as the government tries to minimize the fallout. The damage to consumer confidence, however, could be more lasting, jeopardizing the government’s annual growth target of around 5.5%.

Even before Shanghai’s lockdown announcement, Nomura Holdings Inc. warned that China’s economy was facing its worst downward pressure since the start of the pandemic. The bank’s economists, led by Lu Ting, wrote in a note that markets should worry about weaker growth in the second quarter as they downgraded quarterly forecasts for the rest of the year. year.

Factory activity likely took a hit in March, with the official Manufacturing Purchasing Managers’ Index, due out on Thursday, likely slipping to a contraction after the Shenzhen lockdown, according to Bloomberg Economics.

The lockdown of Shanghai – China’s international financial center and economically largest city – and the measures leading up to it will have a direct impact on the Chinese economy comparable to the episode in Shenzhen. But the negative impact on sentiment could be bigger. So far, the lockdown allows operations to continue at financial institutions and ports. Anything beyond the current plan risks disrupting financial flows and international trade.

On supply chains, China can probably limit the damage as long as the lockdown does not last more than three weeks, according to Raymond Yeung, chief economist for Greater China at Australia & New Zealand Banking Group Ltd.

He said a so-called closed-loop system being tested in Shenzhen – where factory workers live in dormitories, working in a separate bubble from the general public – has mitigated the impact on the economy. Shenzhen’s southern technology hub resumed normal operations on Sunday, about two weeks after the government placed its 17.5 million residents under lockdown. 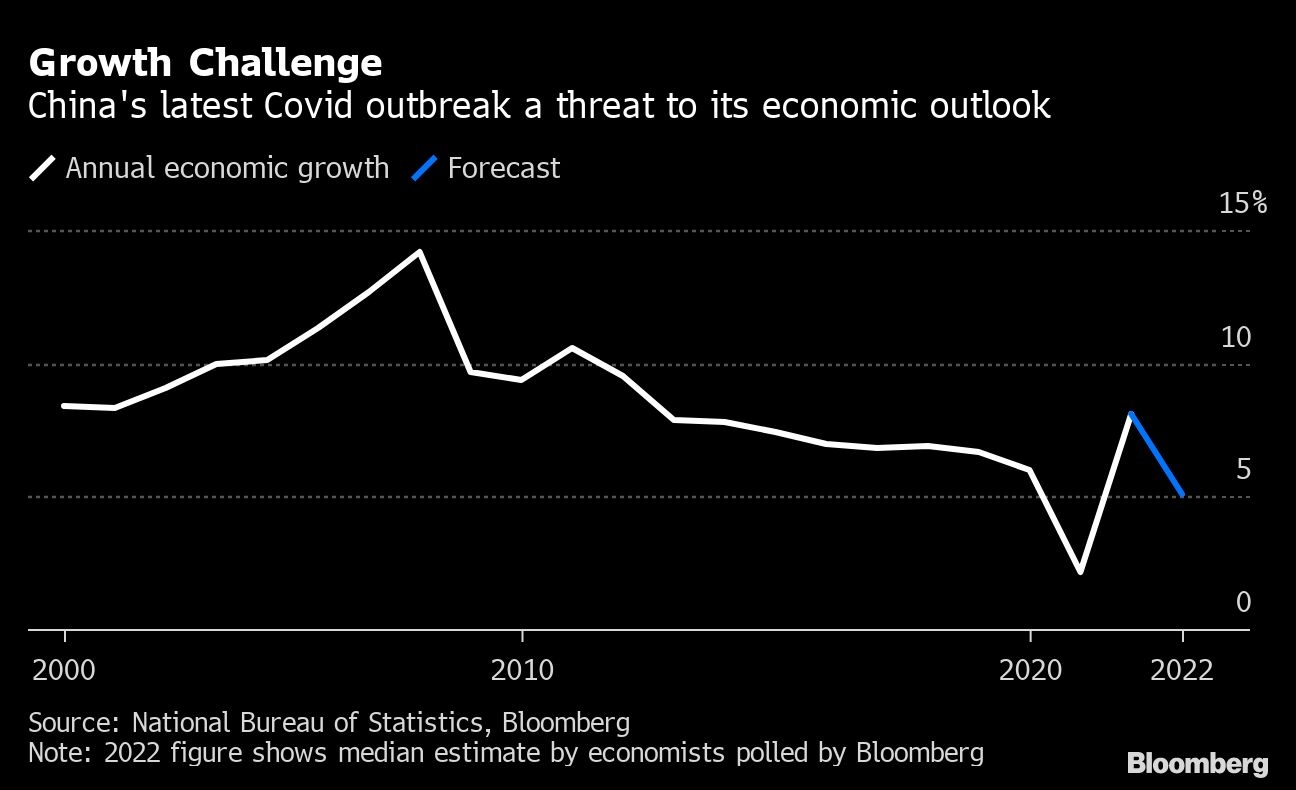 “Similar to Shenzhen, Shanghai is the country’s economic powerhouse,” Yeung said. “The scale is obviously bigger but the action is fast, hoping to minimize the economic impact as soon as possible.”

Shanghai’s port, the world’s largest, still operates 24 hours a day, according to local media. Chinese chipmaker Semiconductor Manufacturing International Corp is maintaining normal production at its factory in the city and complying with COVID prevention measures.

Tesla Inc., meanwhile, suspended production on Monday, with operations to be halted for four days.

China is the latest holdout in the pursuit of COVID Zero, a strategy that prioritizes controlling and eliminating the virus through tough restrictions such as lockdowns and mass testing. Many experts still believe Beijing will not ease the curbs and open up this year, although some have said the country’s virus strategy could continue to be changed, allowing some flexibility.

The government could boost confidence if it detailed a roadmap for eventual reopening to the rest of the world, according to Zhang Zhiwei, chief economist at Pinpoint Asset Management Ltd.

“The main uncertainty facing the fight against COVID in China is that the exit strategy is unclear going forward,” he said. “The zero-tolerance policy is likely to be unsustainable in the long term in terms of economic costs and burden on normal people’s daily lives.”

Larry Hu, an economist at Macquarie Capital Ltd., said policymakers will have “no choice but to step up stimulus in the coming months” in order to meet the GDP growth target this year.

“We maintain our annual GDP forecast of 5% as further policy easing materializes,” he said, anticipating a cut in benchmark interest rates in April, as well as increased support for financial sectors. infrastructure and real estate.