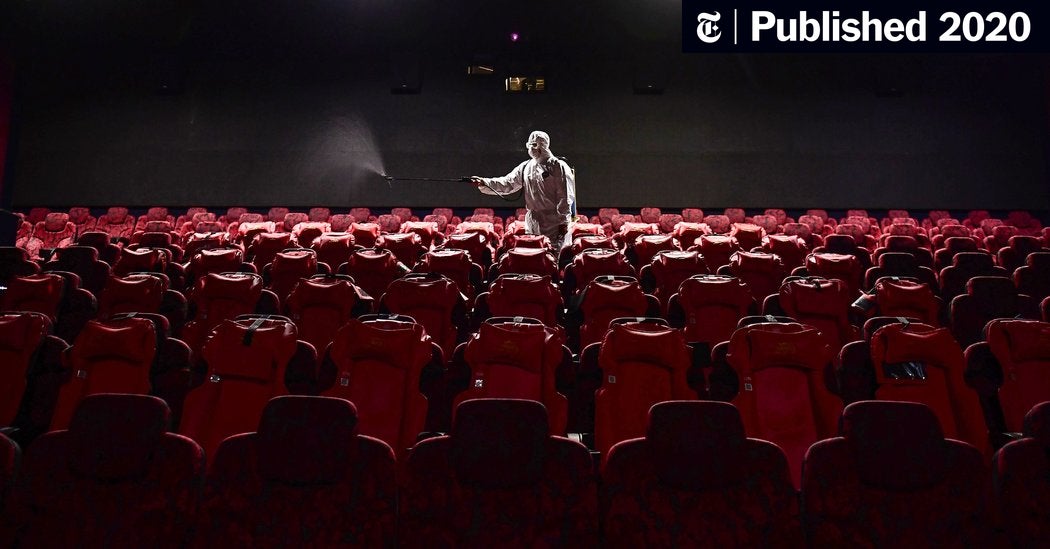 SHANGHAI — To the long list of obstacles holding back the Chinese economy at a time when the world needs it most, add one more: padlocked movie theaters.

The country’s more than 12,000 cinemas have remained stubbornly closed. Reopening them is politically difficult, as the order to keep them closed came from none other than Xi Jinping, China’s top leader.

The rest of the country is trying to get back to business as usual after a devastating coronavirus outbreak this year. Factories, shops, restaurants and bars reopened three months ago and are trying to resume business lost in China’s biggest crisis in a generation.

Some store owners and mall operators say they deeply miss the business of moviegoers, who once filled restaurants and outlets after the show.

“The merchants around the theater are now miserable,” Gao Dezhi, a cinema manager in northeast China’s Liaoning Province, wrote on the Weibo microblogging service in late May. “The flow of visitors to the original cinema has disappeared.”

Data released Monday showed Beijing is still struggling to revive the country’s economy, the world’s second-largest after the United States, even though conditions are less bleak than in early spring.

Retail sales in May fell for the fifth straight month, China’s National Bureau of Statistics said, dropping an unexpected 2.8% from May last year despite higher car sales and groceries and an increase in online shopping. Still, this was a strong improvement from the steeper declines of recent months.

China is one of the most important engines of growth in the world. Getting the global economy back on its feet will be extremely difficult if Beijing fails to get China back up to speed. But widespread job losses have shaken public confidence after the country shut down large swaths of the economy to contain the outbreak. Many are less willing or able to spend.

The country’s workers will face new challenges in the coming months as a global economic downturn, triggered by the pandemic, reduces global demand for smartphones, home appliances, clothing and other factory-produced goods. Chinese.

China itself still faces the risks of the coronavirus. A new outbreak in Beijing has prompted authorities to lock down parts of the city.

With those risks in mind, officials appeared nervous about reopening movie theaters. Cinemas closed at the end of January, as the coronavirus left the city of Wuhan to hit other parts of the country.

Their continued closure seemed assured after Mr Xi said they were not needed. Except for a few brief experiments in several provinces, they have remained closed ever since.

“If anyone wants to watch a movie, just watch it online,” Xi said during a March 31 visit to Hangzhou in east-central China’s Zhejiang province.

In a country that is gradually drifting towards a one-man government, no one has dared to publicly challenge this decision. It’s part of a pattern of sometimes extreme deference to Mr. Xi that has repeated itself with increasing frequency in recent years.

Pretty much everything else has opened up in virtually all of China. Even the live theater has reopened, with patrons allowed to occupy all other seats as part of social distancing. In Shanghai, a play has just opened that celebrates how residents of Wuhan went about their daily lives as the coronavirus outbreak there began and was later brought under control.

Malls around the world rely to some extent on movie theaters to lure people out of their homes, in the hopes that they’ll stick around after the movies to dine or shop. But regulatory idiosyncrasies have made Chinese malls particularly dependent on cinemas to generate foot traffic.

Malls in the United States and Europe often cover several acres in suburban areas where land is relatively inexpensive. Visitors often arrive by car. People can walk in and out of movie theaters without ever walking past or passing through another business in the same mall.

CDC data. The Centers for Disease Control and Prevention has released only a tiny fraction of the Covid data it has collected, including critical data on recalls and hospitalizations, citing incomplete reporting or fears of misinterpretation. Critics say the practice is confusing.

But China has strict regulations to limit the urban sprawl of low-rise buildings. Car ownership is also much less common. Shopping centers must therefore be high and close to public transport.

Shopping malls in China usually occupy five to nine floors of a tall building. Cinemas are often on the top floor of the mall. Moviegoers pass numerous shops and restaurants, ascending and descending a seemingly endless series of escalators.

A study four years ago by the RET China Commercial Real Estate Research Center found that more than half of people who went to a movie theater in a mall in China bought food and drink at the mall. More than 40% of moviegoers also went shopping, according to the study.

Malls and stores inside aren’t the only businesses suffering these days due to movie theater closures.

According to Tianyancha, a Chinese business data service, at least 1,542 film companies and movie studios have closed this year. More than 8,000 film production companies, film consulting firms and other industry-related businesses also failed this year, according to the data.

The company’s announcement said he suffered from insomnia and depression and there were no signs of foul play. Police confirmed his death in a statement but did not provide any details.

Once Xi makes a decision these days, lower-ranking officials sometimes execute it so quickly that new difficulties arise. The closing of cinemas is not the only example.

When Mr. Xi ordered provinces in northern China to reduce smog in late summer 2017, officials threw away coal-fired school stoves without checking whether enough natural gas would be available to provide heat to the place. When Mr. Xi also ordered weeks later that Beijing’s population be reduced, local authorities bulldozed the homes of tens of thousands of migrant workers without notice.

If the cinema order does not end soon, said Mr. Gao, the director of the cinema, the collateral economic damage could be significant. “If they don’t reopen,” he said, “many businesses around theaters are at risk of closing.”