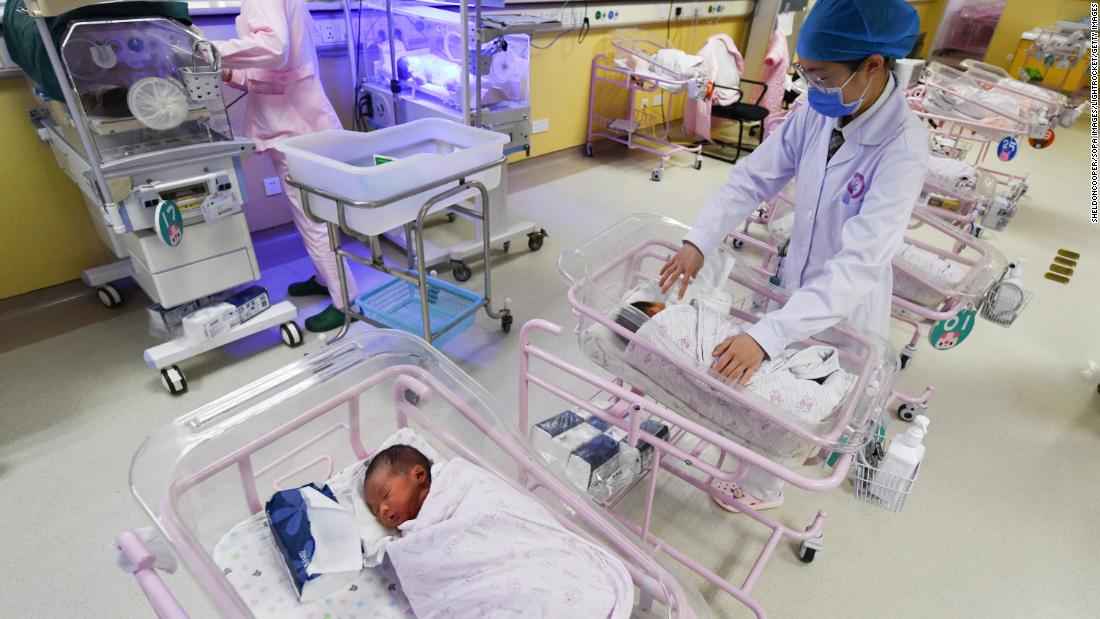 The policy change allowing couples to have three children instead of two – announced on Monday – aims to improve China’s “demographic structure”, cope with an aging population and maintain “abundant human resources” for the second largest economy in the world, according to the state. -Course Xinhua News Agency.

The move is a huge change for China, which only relaxed its long-standing one-child policy six years ago.

But the pressure has grown since then, and just a few weeks ago China reported an alarming drop in its workforce that economists say could cap economic growth. Recent census data showed that the Chinese population is growing at its slowest rate in decades, while the number of people aged 15 to 59 fell below 900 million to about 63% of the population in 2020, a decrease of 7 percentage points from a decade earlier.

“The demographic dividend that has propelled the country’s economic boom over the past decades is expected to dissipate quickly,” Yue Su, an economist at the Economist Intelligence Unit in London, said in remarks released earlier this month.

This could pose a problem for the broad economic policy goals set by President Xi Jinping. He expressed his ambition to double China’s GDP by 2035.

And while some forecasters say China could overtake the United States as the world’s largest economy by the end of this decade, it has a much bigger gap to fill in terms of prosperity. China’s per capita GDP stands at $ 17,000, compared to a US figure of over $ 63,000, according to the International Monetary Fund.

China introduced its one-child policy more than 40 years ago to fight overpopulation and reduce poverty. But as the population aged, Beijing began to relax its policies and in 2015 announced it would ease restrictions to allow up to two children per family.
Now the government is easing even more – but just telling people they are allowed to have more children may not be enough on its own to deal with the demographic crisis. China’s birth rate fell nearly 15% year-over-year in 2020, and some people have pointed out that the rising cost of living is a major obstacle to creating large families.

There was a noticeable lack of enthusiasm on Chinese social media following Monday’s announcement. Reasons for not wanting to have a third child – or any child, for that matter – were among the hottest topics on Weibo, a Twitter-like social media platform in China.

“It’s mainly because I feel tired” a Weibo user wrote. â€œHow can I afford to have a child when the pressure in life is so high? “

Xinhua asked Weibo users if they were ready for a third child. The online survey drew more than 30,000 responses in half an hour, of which over 90% voted â€œabsolutely not consideredâ€. The investigation has been quietly withdrawn.

“Barring other measures to encourage fertility, further liberalization of birth limits may provide only limited help with birth rates and overall population growth in China,” Goldman Sachs analysts wrote. in a research note last week. “The population in China appears likely to peak over the next five years as the working-age population continues to decline.”

– Ben Westcott contributed to this report.