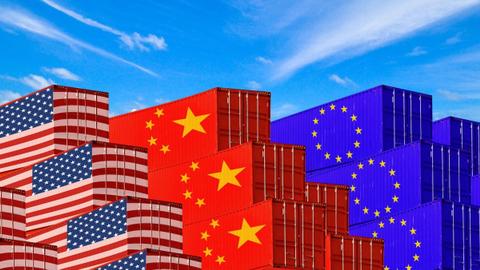 By 2030, China is expected to become the largest economy in the world, for now it has just overtaken the EU.

At a pivotal moment, China’s economy overtook the whole of the European Union (EU), for the first time.

Figures released this week by the European Statistical Office (Eurostat) show that the EU’s gross domestic product (GDP) grew by 5.2% for 2021, following a record recession in 2020.

GDP is a measure of the market value of all final goods and services produced during a given period.

On the other hand, China’s GDP for 2021 grew by 8.1 percent, according to figures released last month by the National County Bureau of Statistics. Full-year GDP led to an increase in the value of China’s economy by $3 trillion between 2020 and $17.7 trillion in 2021, outpacing the EU.

The second largest economy in the world benefited greatly during the Covid-19 crisis from its status as the factory of the world. However, most of China’s economic gains have been driven by strong industrial production and exports.

China, however, has largely followed a zero Covid-19 policy, meaning the country has often locked down entire cities in an effort to prevent the spread of the virus.

The result has been that while the country’s manufacturing sector continues to grow, growth in services, consumption and investment has not returned to pre-pandemic levels due to localized outbreaks across the country that have prevented a return to normal.

China’s GDP growth rate easily exceeded the government’s target of more than 6% growth, and the country is now expected to account for more than 18% of global GDP.

As the country rebounded from the worst of the pandemic, analysts warn the country is still reeling from a weak real estate sector that saw businesses go bankrupt last year.

Likewise, the EU has yet to fully recover from the tight restrictions of the Omicron variant, which have led to tighter restrictions across the economic bloc, resulting in lower consumer spending and bottlenecks in the supply chain, affecting manufacturing.

China’s ability to leapfrog the bloc has also been influenced in part by the UK’s withdrawal from the EU after Brexit. The UK’s GDP of $2.7 trillion was the second largest in the bloc after Germany.

Beijing still has a long way to go before becoming the largest economy on the planet.

In a report released last month, the British consultancy Center for Economics and Business Research (CEBR) predicted that China will overtake the United States as the world’s largest economy by 2030.

The CEBR report projects that the US economy will continue to grow without any of the growth spurts needed to maintain its lead. He also added that China’s massive pool of engineers would be an important engine of growth unlike the United States, which cannot produce the same level of highly skilled labor.

In recent years, Chinese leaders have shifted their focus from achieving maximum levels of GDP growth to a high-quality growth stage.

Chinese President Xi Jinping said at the 19th National Congress of the Communist Party of China in 2017 that the country’s economy was emerging from a phase of rapid growth.

This means that the country is now seeking to invest and manufacture high-end products through innovation and technological self-sufficiency.

In a report on China’s reforms towards higher quality growth, the World Bank said the country needed to rebalance “external demand towards domestic demand and growth led by investment and industry towards greater dependence on consumption and services”.

The report adds that the country will also need to transition from a high-carbon to a low-carbon economy. China is already a world leader in renewable energy production figures and is currently the largest producer of wind and solar power in the world. It also has the largest electric vehicle market in the world.

ITV For The Love Of Dogs: Paul O’Grady’s close friendship with showbiz legend Cilla Black and the pretty Kent village where he lives on a farm