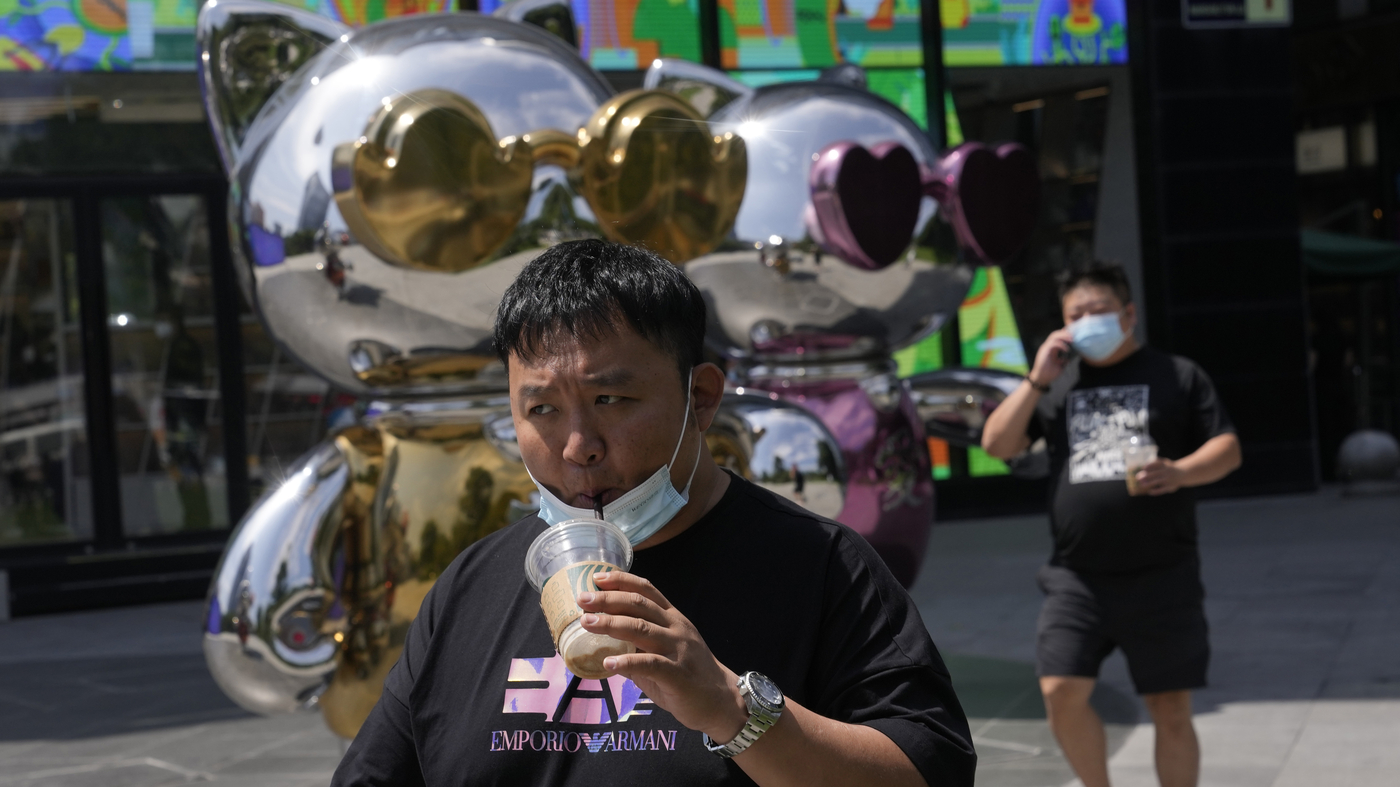 A man lowers his mask to drink from a cup while passing near a shopping mall, Wednesday, July 13, 2022, in Beijing.

A man lowers his mask to drink from a cup while passing near a shopping mall, Wednesday, July 13, 2022, in Beijing.

BEIJING — China’s economy contracted in the three months to June from the previous quarter after Shanghai and other cities were shut down to fight coronavirus outbreaks, but the government said a “stable recovery” was underway after businesses reopened.

The world’s second-largest economy shrank 2.6%, down from an already weak 1.4% in the January-March period, official data showed on Friday. Year-on-year, a measure that may mask recent swings, growth slipped to 0.4% from 4.8% in the previous quarter.

Activity was “much weaker than expected,” S&P Global Market Intelligence’s Rajiv Biswas said in a report.

Asian stock markets were mixed after the news. Hong Kong lost 0.8% by mid-morning while Shanghai, Tokyo and Seoul gained.

Virus checks shut down Shanghai, the site of the world’s busiest port, and other industrial hubs from late March, fueling fears that global trade and manufacturing could be disrupted. Millions of families have been confined to their homes, which has weighed on consumer spending.

Factories and offices were allowed to reopen in May, but economists say it will be weeks or months before activity returns to normal. Economists and business groups say China’s trading partners will feel the impact of shipping disruptions in the coming months.

“The resurgence of the pandemic has been effectively contained,” the statistics office said in a statement. “The national economy has recorded a stable recovery.”

Data on industrial production, consumer spending and other activities suggest overall growth was even weaker than the headline figure, Julian Evans-Pritchard of Capital Economics said in a report.

“Even taking into account June’s strength, the data is consistent with negative year-over-year (year-on-year) growth in the last quarter,” Evans-Pritchard wrote. “This is not the first time that official GDP figures have apparently underestimated the extent of an economic downturn.”

The number of infections in China is relatively low, but Beijing has responded to its biggest outbreak since the pandemic began in 2020 with a “zero-COVID” policy that aims to isolate anyone who tests positive. The ruling party moved to quarantining individual buildings or infected neighborhoods, but those restrictions covered areas with millions of people.

The ruling Communist Party promises tax refunds, free rent and other aid to get businesses back on their feet, but most forecasters expect China to miss the growth target of 5.5% of the ruling party this year.

Other major economies are growing from the previous quarter, so their levels look lower than China’s. For decades, Beijing only recorded growth from the previous year, which saw short-term fluctuations, but started to release quarterly figures.

Forecasters say Beijing is using cautious, targeted stimulus instead of general spending, a strategy that will take longer to show results. Chinese leaders fear that too much spending could drive up politically sensitive housing costs or that corporate debt could be dangerously high.

Growth for the first half of the year was 2.5% from a year earlier, one of the lowest levels in three decades.

Retail sales fell 0.7% from a year earlier in the first half after falling 11% in April.

Investment in factories, real estate and other fixed assets rose 6.1%, reflecting the ruling party’s efforts to spur growth by increasing spending on construction of public works and ordering state-owned enterprises to spend more .

China is also facing headwinds from weak global demand. Exports jumped 17.9% in June from a year earlier, but forecasters say that was due to goods being evacuated from ports after anti-virus measures were lifted. They say growth is likely to fall back.

China rebounded quickly from the 2020 pandemic, but activity weakened as the government tightened controls on the use of debt by its vast real estate industry, which supports millions of jobs. Economic growth slowed due to a slump in construction and home sales.

Investors are waiting to see what happens to one of China’s biggest developers, Evergrande Group. It has struggled since last year to avoid defaulting on $310 billion owed to banks and bondholders.