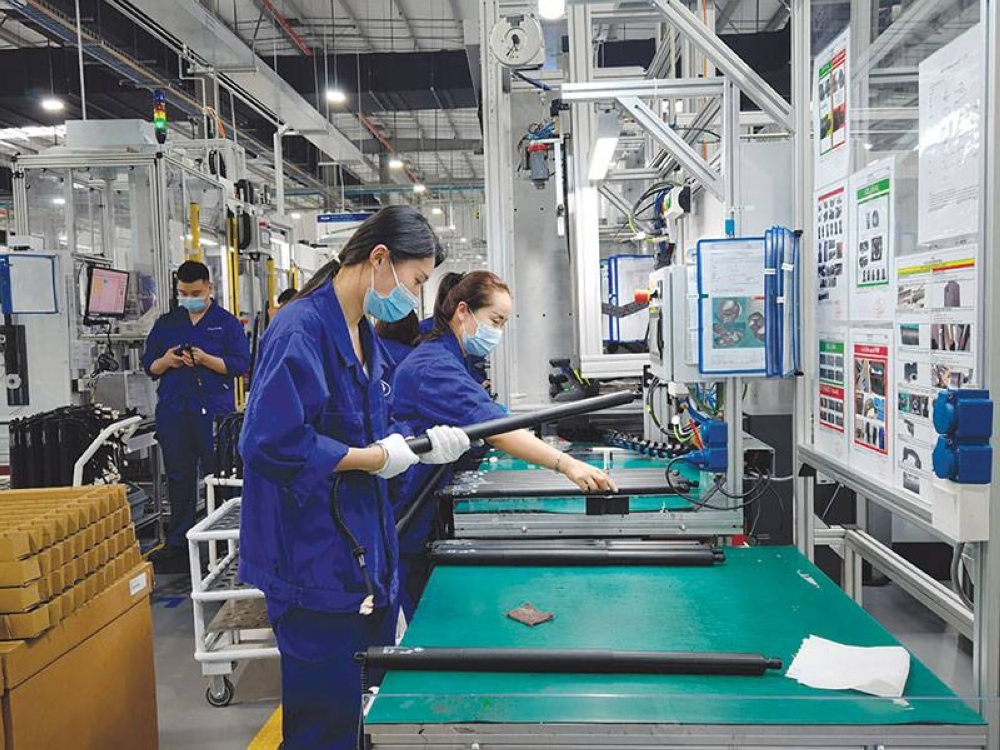 This file photo from April 19, 2022 shows uniformed workers at the factory of gas spring manufacturer Stabilus (Zhejiang) Co. Ltd. in Pinghu, in the eastern province of Zhejiang in China. PHOTO XINHUA

BEIJING: Amid growing uncertainties, a key meeting of China’s top policymakers offers a dose of confidence in the world’s second-largest economy.

The Political Bureau of the Communist Party of China Central Committee held a meeting on April 29 to analyze the current economic situation in the East Asian country, vowing to step up political support to stabilize the economy.

The meeting touched on key issues including the real estate market, stock market and platform economy, while pledging efforts to keep the economy at a reasonable level.

After the meeting, the Chinese A-share market responded with a long-awaited rebound. The benchmark Shanghai Composite closed 2.41% higher after bearish sentiment for the week sent it below 3,000 points.

China’s economy faces growing complexities and uncertainties due to the surge in coronavirus infections and the lockdowns imposed to contain them, as well as the ongoing war in Ukraine, as policymakers seek to maintain growth, employment and stable prices.

The economy grew 4.8% year-on-year in the first quarter as outbreaks fueled by the highly transmissible variant of Omicron broke out across China.

Policy makers have introduced several measures to support growth. In order to reduce the financing costs of the real economy, the People’s Bank of China recently reduced the reserve requirement ratio for financial institutions, while introducing special loans to support sectors, especially those that promote scientific and technological innovation and care for the elderly.

Last Friday’s meeting called for faster implementation of policies that had already been arranged, noting that various monetary tools should be well used.

The meeting also shed light on the country’s pivotal real estate sector, reiterating the principle that “housing is for living, not speculation” while calling for efforts to improve real estate policies according to local realities.

Zhong Zhengsheng, an economist at Pingan Securities, said housing restrictions in more cities would likely be adjusted, while lending to property developers could ease pressure on their cash flow.

The meeting also demanded to respond to foreign companies’ demands for a conducive business environment while pledging to deploy specific measures to support the standardized and healthy development of the platform economy.

Philippines Election 2022: What You Need to Know About Presidential Voting | Philippines