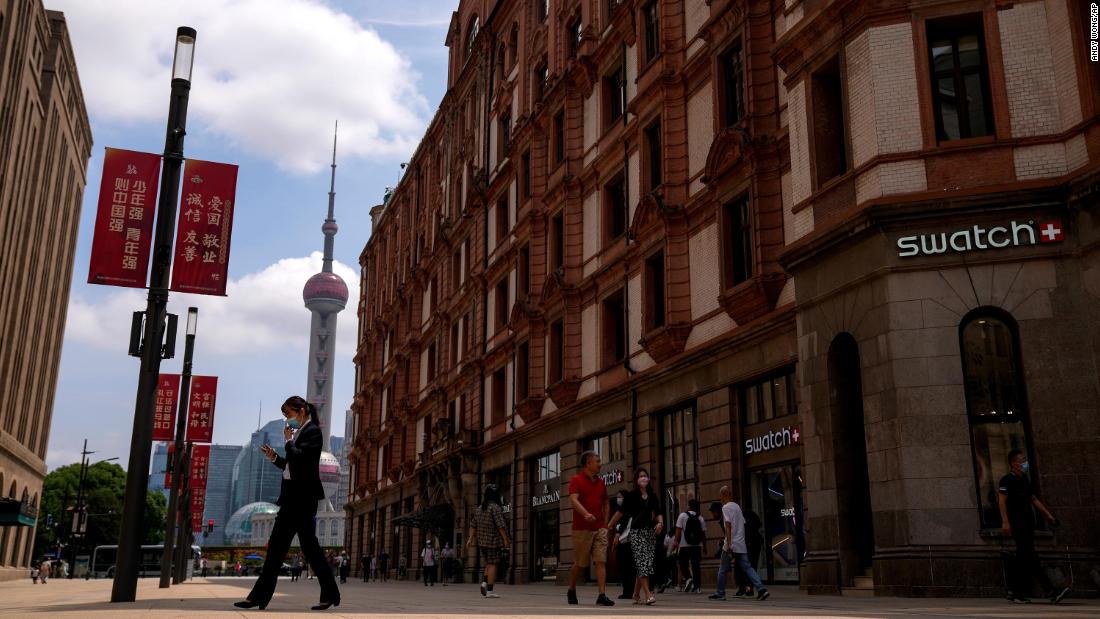 Retail sales struggled in August, increasing only 2.5% from the previous year, government statistics released Wednesday. It was much weaker than expected and a dramatic slowdown from the 8.5% increase recorded in July.

Chinese authorities have attributed the slowdown in growth to the Covid-19 epidemics and flooding, which have prevented people from traveling and forced them to suspend their “summer vacation spending,” according to Fu Linghui, spokesperson from the National Bureau of Statistics, who spoke at a press conference in Beijing on Wednesday.

Industrial production rose 5.3% in August from a year earlier, also slower than in July and the weakest growth generated by Chinese factories in a year.

Investment in urban areas, meanwhile, rose 8.9% for the January-August period, compared to 10.3% in the first seven months of the year.

The data released on Wednesday is the most again clearly showing how the measures taken by the government to slow a Delta variant outbreak this summer have affected the economy. To stop new infections, China pursued an aggressive zero Covid strategy, closing cities, canceling flights and suspending certain port operations.

The approach worked to bring the virus back under control, albeit at the expense of economic activity.

But the Chinese economy also faces other concerns, including a tightening of the real estate sector.

New housing projects, measured by floor space, fell 3.2% in the first eight months of the year.

“The headwinds facing the real estate industry appear to be intensifying,” wrote Julian Evans-Pritchard, senior Chinese economist for Capital Economics, in a research report Wednesday. He added that government restrictions on borrowing among real estate developers are straining the industry.

Recently, the Chinese real estate giant that of Evergrande The cash flow crisis has deepened dramatically and the company has warned it could default on its massive debts as it struggles to cut costs or find buyers for some of its assets.
The company, one of China’s largest real estate developers, has already sparked turmoil in the country’s markets as its bonds and stocks plunge. Investors fear that a default could spill over into China’s banking system and the economy at large, as well as trigger social unrest. Already the investors and the company’s own employees allegedly demonstrated at Evergrande headquarters in Shenzhen, as well as Sichuan, Jilin and Henan Provinces.

The coronavirus, meanwhile, could continue to thwart the economy. A new outbreak in southeastern Fujian Province “poses a downside risk to our forecast of a resumption of growth” in the fourth quarter, after a weak third quarter, wrote Louis Kuijs, head of the Asian economy for Oxford Economics, in a research report Wednesday. .

He added that he expects “the strict stance on financing real estate developers to remain and regulatory tightening on internet companies to weigh on sentiment and growth.” referring to the ongoing government crackdown on big tech companies.

But Kuijs added that the Chinese government will likely be keen to avoid a sharp slowdown. He expects the authorities to support growth in the coming months by cutting interest rates and allowing local governments to issue more bonds to finance infrastructure projects.