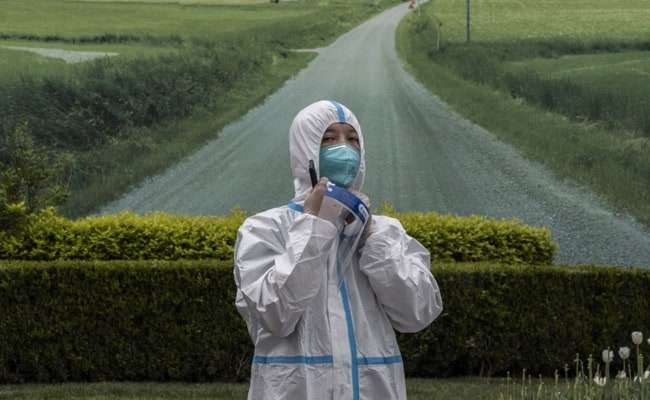 China’s adherence to the Covid Zero strategy means more cities could be brought under lockdown. Bloomberg

China’s economy slowed rapidly in April as the costs of the worsening Covid outbreak and the country’s tough approach to stamping out the virus took their toll.

This is the outlook for Bloomberg’s aggregate index of the top eight indicators for this month. The global gauge fell below the mark that separates improving from deteriorating conditions and reached the worst level since April 2020, suggesting that the current wave of epidemics has dealt a severe blow to the economy.

The March result was revised down from 5 to the neutral 4 level after taking into account declines in the purchasing managers’ indices during that month. The near-widespread contraction in PMIs marked a turning point for the economy and came as daily Covid cases rose from around 100 to around 8,000 a day, prompting lockdowns and restrictions across the country.

These closures in major Chinese cities, including Shanghai, extended into April, continuing to hurt the world’s second-largest economy. Financial markets plunged on Monday after the government ordered mass testing in Beijing and locked down parts of the capital.

The services sector was already suffering in March, with consumer spending contracting the most since mid-2020. It is likely that industries such as travel and restaurants were hit even harder in April as more people stayed home, either because they were forced to or because they feared a possible infection during their outings.

While the manufacturing sector appears less vulnerable than services, restrictions on road transport and ports have limited the activities of some companies, especially in areas of Shanghai and surrounding areas.

Small business confidence fell to its lowest level in more than two years in April, according to Standard Chartered Plc’s survey of more than 500 small businesses, mainly due to the impact of large-scale closures. Business sentiment also weakened sharply, with the “expectations” sub-index falling to a 26-month low, according to the survey.

Small and medium-sized business output and demand saw a “sharp deterioration” during the month, likely weighing on their profitability and investment appetite, Standard Chartered economists Hunter Chan and Ding Shuang wrote in a report. report.

Home sales have continued to plunge and car sales have fallen so far this month, despite relaxed rules on buying homes in more than 100 cities and government policies encouraging purchases of items expensive such as automobiles and household appliances.

A bright spot for the economy is the fact that external demand has remained strong so far this year. South Korean exports, a leading indicator of global trade, rose at a faster pace in the first 20 days of April than in March, mainly supported by strong US demand. However, shipments to China barely increased, suggesting weak domestic demand.

The outlook is bleak, with China’s embrace of the Covid Zero strategy meaning more cities could be placed on lockdown. The benchmark stock index lost nearly 10% of its value this month and fell 23% this year, as economists lowered their growth forecasts for China due to widespread restrictions. Without new and stronger policies to support the economy, the country’s ambitious target of around 5.5% economic growth this year looks increasingly under threat.