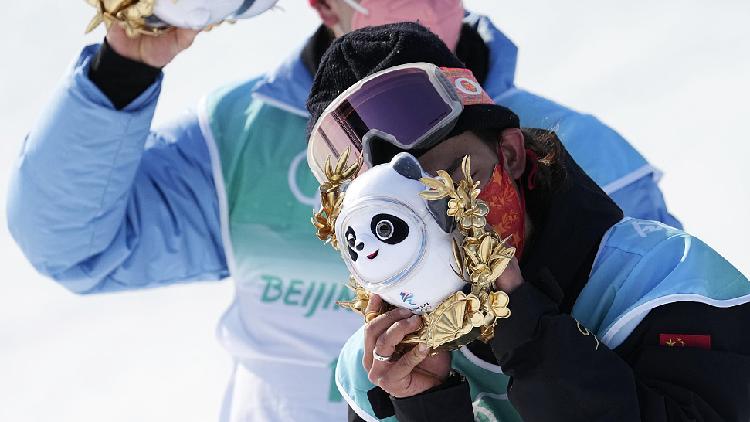 As the 2022 Winter Olympics draw the world’s attention to Beijing, Chinese athletes are showing their ability beyond the sports arena by starring in a wide array of commercials or setting up their own businesses.

It is common for brands to cooperate with well-known sports stars. When social media is reshaping advertising and marketing, it is changing faster than before.

Beyond the track, Su is also an associate professor at Guangzhou-based Jinan University’s School of Physical Education. His academic background also matches the image of the technology company.

Other athletes who received great attention during the Tokyo Olympics, including sports shooter Yang Qian and table tennis player Ma Long, all quickly appeared in advertisements and commercials for brands.

The passion for the sport, as well as for the stars of the sport, continued and was further boosted by the Beijing 2022 Winter Olympics as more and more young athletes emerged.

The success of Gu Ailing, China’s first big air gold medalist in freestyle skiing at the Beijing Games, has sparked a frenzy in the country.

The 18-year-old athlete has become a popular choice for many brands. It has cooperated with more than 20 companies, including traditional sports enterprises, vertical business lines and major luxury brands.

Global brands have bet on the teenage star’s healthy image and massive influence: Gu has around 13.22 million subscribers on short-video platform Douyin, China’s version of TikTok, and 4.74 million followers on Twitter, like Weibo.

Media have estimated that mentions of her brand have resulted in more than 200 million yuan ($31.45 million) in 2021.

As China has risen to prominence in global sport in recent years, the country’s athletes have become brand favorites for their healthy image and self-discipline, making them lower-risk options compared to pop stars, a reported Chinanews.com.

There are also fears that the explosive popularity could distract athletes from their training and development.

After 17-year-old snowboarder Su Yiming rose to popularity during the 2022 Beijing Olympics, his agent told the media that they had to reject around 100 business endorsement proposals every day.

Su made history by winning a silver medal in the men’s slopestyle final on Feb. 7 and gave China gold in the men’s big air with a stunning show on Tuesday, Feb. 15. He’s already had commercial endorsements for sports, food and automotive brands.

When an athlete becomes known, it is necessary to protect them and prioritize their long-term development and personal will, said Yang Ran, Su’s agent.

Another athlete making a splash at the Winter Olympics is former Chinese short-track speed skater Wang Meng, a four-time Olympic champion, who became an instant hit as a sports commentator for her humor.

A video of the highlights of his comments has been viewed by more than 16.83 million people on Weibo. #WangMengCommentary’s trending topic garnered 962 million views on Weibo on February 6 alone.

The company only deals with former athletes, she said, adding that in addition to Olympic gold medalists and world champions, there are many lesser-known athletes who need jobs after have retired from the sport.