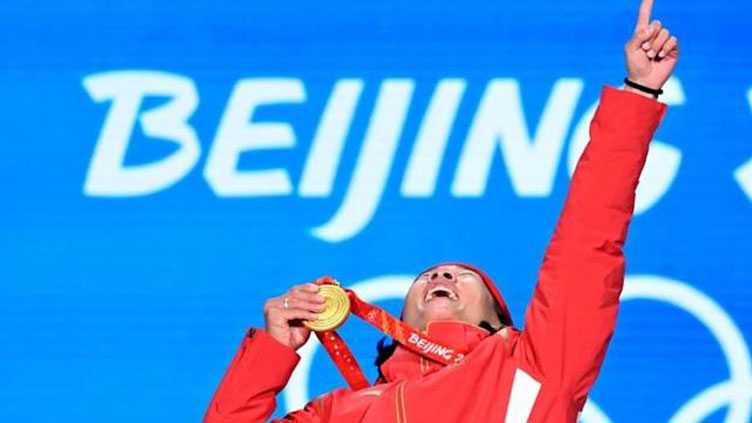 The former child actor is one of the stars of the Beijing Olympics after winning silver and then gold on Tuesday, catapulting the 17-year-old to stardom and amassing an avid social media fanbase for him at the House.

Su heralds the rise of a new generation of patriotic young Chinese athletes with the kind of cool aura that eluded young Olympians who, unlike Su, are products of China’s grueling Soviet-style sports academies.

China’s first men’s Olympic snowboarding medalist has won a legion of Chinese fans with his down-to-earth attitude, natural style and love of music, while becoming the new face of a sport that promotes individualism and daredevil courage.

“Snowboarders have a particular style that fits Su perfectly. It’s something that would certainly resonate with younger generations in China and elsewhere,” said China-based sports analyst Mark Dreyer, author of “Sporting Superpower: An Insider’s View on China’s Quest to Be the Best”.

After a scintillating run in the slopestyle last week, where he won silver, Su put his hands over his mouth and repeatedly shouted a profanity in live English.

“My worry is that at some point they’re going to ask him to conform and basically be a snowboarder without (personality),” Dreyer added.


Hailing from the freezing northeast of China, Su first hit the slopes as a toddler. He joined the Chinese national team at the age of 14 after years of balancing his passion with a budding acting career.

He landed his first marquee deal with snowboard maker Burton aged seven, though his commercial endorsements are only a fraction of fellow teenage star Eileen Gu, the California-born Chinese freestyle skier who also won silver and gold.

“He’s really just come into the upper echelon of runners over the last four to six months,” Dreyer said.

Described by his trainer as mature beyond his years, the snowboarder has said in interviews that he trains “320 days a year”, sometimes six hours a day when trying to master a tricky new move.

His father says he has an “innate passion for snowboarding”.

When not training overseas, Su surfs on the island of Hainan in southern China during the off-season summer.

“In order for him to compete and stay at the top level, he has to be in Europe and the United States. He’s getting all those influences and becoming more and more of an international person,” Dreyer said.

“If you have a goal, have the courage to try it and give it your all,” Su told state broadcaster CCTV.


These culturally confident young stars – including 18-year-old Chinese-American Gu – are a valuable addition to China’s soft power arsenal at a time when Beijing is keen to project cultural influence abroad and show confidence interior.

Su and Gu’s cosmopolitan lifestyles have sparked reflection on social media about their relative privilege compared to figures such as 14-year-old Olympic diver Quan Hongchan, who has spoken of earning competitive money to support his farming parents.

While Beijing has firmly maintained its rigid system of state academies for athletes – prioritizing sports with greater medal chances – experts said it has relinquished control slightly in some disciplines, particularly when it comes to winter sports.

Zheng Jinming, professor of sports management at the National Institute of Education in Singapore, said this has allowed market forces to create a more organic interest in “cool” sports among younger generations of Chinese who have grew up in better economic conditions.

“But can those interested in these cool sports successfully access resources that can get them started, get quality training, and progress in these sports?” Zheng asked.

Analysts have also wondered if these new sports celebrities will be able to maintain their authenticity as their popularity in China snowballs.

The more China wants Su to conform to their idea of ​​a healthy model, “the more it takes away from its appeal in the first place,” Dreyer said.