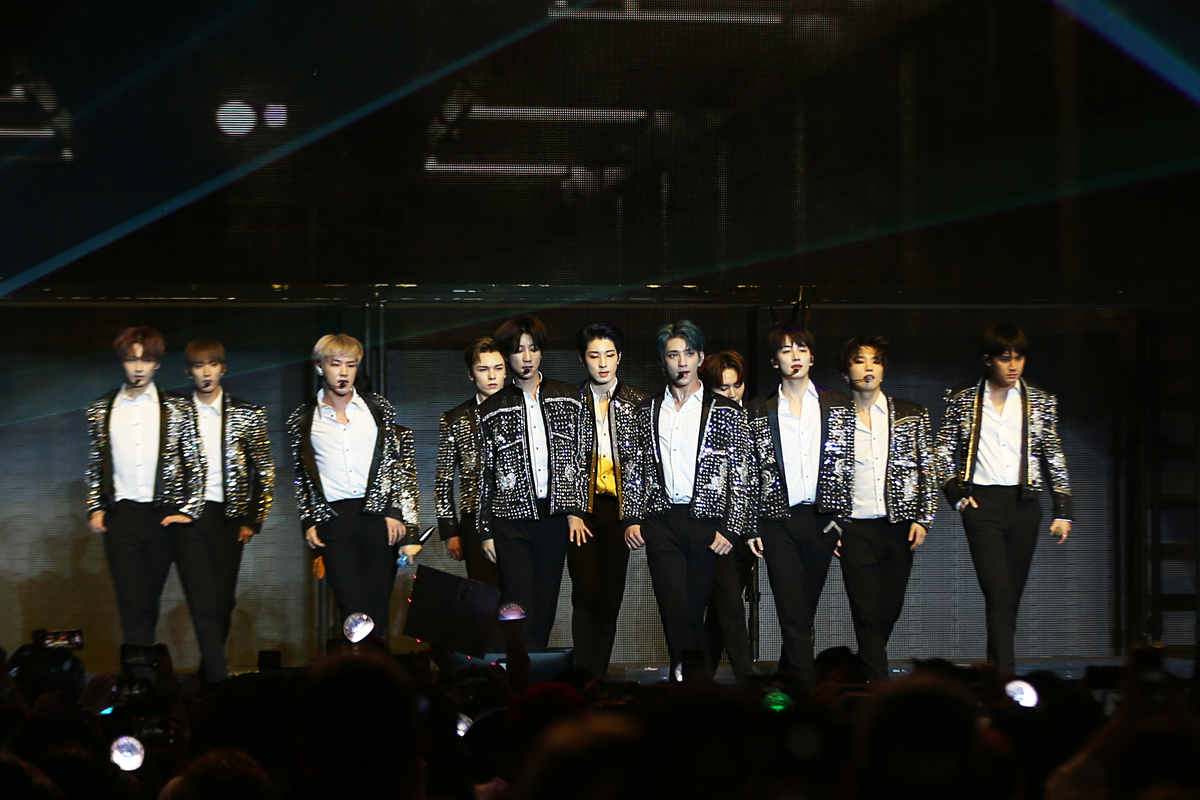 During the third week of April, fans of K-pop group Seventeen had the opportunity to see their favorite idols on the big screen. Seventeen Powers of Love – The Movie played in theaters worldwide on Wednesday April 20 and Saturday April 23. Fans in Japan can see the film on April 29. For 100 minutes, Carats (the Seventeens fandom) was treated to concert footage and interviews with all 13 members.

For seven years, the group worked hard and faced adversity. They wanted this film to be a love letter to Carats. Seventeen reciprocates the love they feel from their fans throughout the film. They are driven by Carats to make their fans proud of everything they do. As Jun said, “If there are no carats, there are no seventeen.”

In a touching moment, Woozi shares, “Someone once said to me, ‘I found the strength to live through your music.’ I’ve learned that it works the other way too. That’s how I feel about our fans. I’m becoming a person who finds the strength to live, thanks to them.

For long-time fans, the concert documentary might not give them much new information. With such a large group, it can be difficult for new fans to get an idea of ​​each member. In Seventeen Powers of Love – The Movie, each member gets individual screen time through one-on-one interviews. This plays well in connecting viewers to individual members.

Fans want to know the person behind the idol character. Unfortunately, in Seventeen Powers of Love – The Movie, the idol character is always in the foreground. The interviews and behind-the-scenes footage don’t dive below the surface to show fans Seventeen’s deeper side. Woozi’s emotional moment is one of the few in the entire movie.

In other K-pop concert documentaries, viewers got a deeper look into the psyche of the person behind the character. The carats were left without any new information regarding their favorite members. Thankfully, there are some fantastic performances and musical moments reminding the world of Seventeen’s talent and abilities.

Through 22 songs, the 13 members of Seventeen present their talent and sonic diversity. Most of the performances are from the 2021 live concert. With exciting new arrangements of songs, Seventeen was able to make older songs feel fresh and exciting. The staging, choreography and singing were impressive.

Fans know that Seventeen never disappoints live, but the setlist offers a great sampling of who Seventeen is for new Carats. Highlights include opener “Crush”, a superb guitar solo by Woozi during “Clap”, “Anyone”, “Crazy Love” and “Rock With You”. Some songs were cut from the November live stream, including Hoshi’s excellent performance of “Spider.”

Both The8 and Jun were absent from the November live stream. The two members are from China and returned home to spend time with their families at the time of filming. They are included in interviews and other footage throughout the film.

What’s next for Seventeen

Seventeen recently released their first English single, “Darl+ing”. The next is their fourth full album, Facing the sun.

At the end of Seventeen Powers of Love – The Movie, the band members talk about touring and how much they miss Carats. Joshua says: “I want to tell you all that you are so precious to us. I hope we can all have fun at the concerts soon.

It looked like they were going to announce a new tour, but fans left the theater without any official announcement. In 2020, Seventeen’s Pledis label was acquired by HYBE, the home of BTS. It will be fun to see what Seventeen dreams up for their next world tour with more resources behind them.