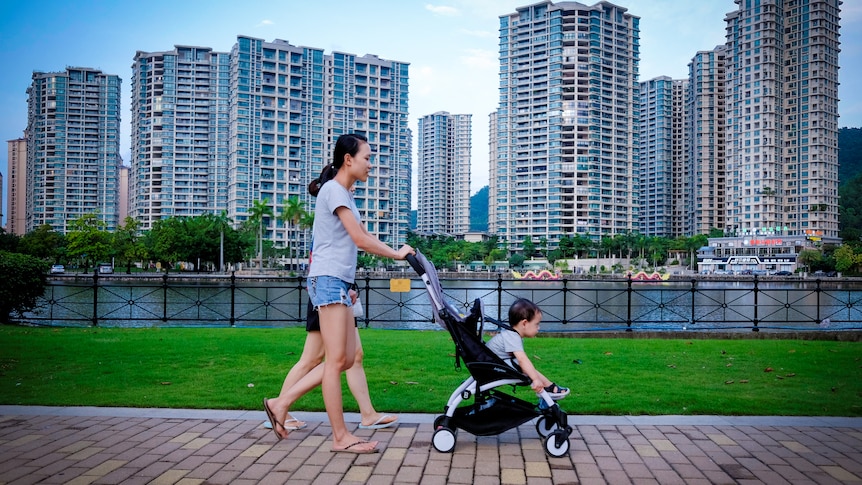 The Chinese economy faces multiple challenges, but what could these pressures mean for Australia?

Mr. Zhao has deposited his savings in a bank in central China, but can no longer access them.

“All my savings suddenly went to zero. I’m lost,” he said.

Mr Zhao – who only wanted to use his surname for fear of reprisals from local authorities for speaking to the media – is among 400,000 people affected by one of China’s biggest banking sagas.

Six banks in rural China have been hit hard by Beijing’s efforts to contain a property bubble and spiraling debt, in a financial crackdown that has had repercussions for the world’s second-largest economy.

The slowdown has forced four banks in Henan province and two in Anhui province to freeze all cash withdrawals since mid-April, leaving thousands of small savers without funds and sparking rare, sometimes violent protests .

When it comes to China’s economic woes, the banking issue is just the tip of the iceberg.

Here’s a look at other issues affecting the country’s economy and how some business leaders think China’s situation could affect Australia.

Speaking to ABC’s The World, she said China’s strict adherence to its COVID-zero strategy had also slowed global economic growth and contributed to rising inflation around the world, noting that “2022 is going to be a tough ride for the economy world”.

“It’s not the technical way to describe it, but I think it’s the reality we live in,” she said.

Ms Bekink said China’s economic situation was having ‘ripple effects’ on other economies, including Australia’s, which had been demonstrated by disruptions to chain manufacturing and transport supply since the start of the pandemic.

“On the one hand, it demonstrates our global interconnectivity,” she said.

“But… it also demonstrates the need to find more holistic solutions to some of these pressing challenges.

“What’s happening in China – and the shutdowns in Shanghai – has effects on Melbourne and beyond.”

Li Wei, professor of international business at the University of Sydney, said Australia’s economy was in a strong position and had proven resilient to declines in China’s economy in the past.

“If China’s full-year economic growth remains at 2% this year, Australia will not be affected,” Dr Li said.

Wang Jiao, a researcher at the Institute for Applied Economic and Social Research in Melbourne, said that despite the sharp decline in the growth figure, the data also suggested China’s economy was already rebounding.

“When we look at the second quarter itself, it’s bad,” Dr. Wang said, “but, if we put it in a short-term perspective, I think the June data, in particular, showed let the economy recover.”

The real estate market in China under pressure

In addition to the banking saga, another key issue facing the Chinese economy is a declining real estate market.

“Real estate accounts for about 78% of household wealth in China,” Ms Bekink said.

In China, buyers start making mortgage payments on a property when the down payment is paid, even before construction is complete.

“Loan payments start with that initial deposit and they can go on for years while projects are delayed and that’s what you see now,” Ms Bekink said.

“Over the past decade, that presale money is really what fueled the property boom and allowed developers to start new projects before old ones were completed.”

The situation has led thousands of buyers involved in around 100 projects in 50 cities to refuse to pay their mortgages due to construction delays, which, in turn, has stalled housing projects in China.

Ms Bekink said it was still unclear whether the crisis in the housing sector was “recoverable”.

“Anything lost in the housing market could be offset by increased demand for infrastructure investment,” she said.

Local media have reported that civil servants in China’s wealthy east coast provinces have had their salaries cut by up to 30%, while various bonuses have been cancelled.

Sources told the ABC that some staff members of public institutions in Henan province, where the banking scandal occurred, even had their salaries suspended.

China rules out any economic stimulus

Chinese Premier Li Keqiang said this week that the government would not provide any large-scale stimulus package to boost the country’s economy.

Speaking at a virtual dialogue hosted by the World Economic Forum, Li said it would take a long time for the economy to stabilize, but the country would “try its best” to achieve growth. .

Dr Li, from the University of Sydney, said China’s policy to combat COVID-19 and Russia’s invasion of Ukraine will continue to challenge the Chinese economy this year.

“Usually China will use central government financial support to stabilize its economy,” she said.

“But … I don’t think China’s economic growth this year will reach the official target of 5.5% or the 4.3% recently predicted by the World Bank.”

In 2020, Beijing announced a series of infrastructure plans to boost the economy, including the development of the 5G network, high-speed trains, electric vehicles and charging stations.

What’s going on with these banks?

To assuage anger over the banking scandal, Henan’s provincial banking and insurance regulator said the money would start flowing.

“The advance payment will be paid to customers with a combined amount of less than 50,000 yuan in savings at a single institution,” he said.

However, the authority’s decision is unlikely to immediately restore trust between depositors and their banks.

“The Chinese trust banks 100 percent. They should be safer than a safe,” said Mr. Chen, another customer who had been denied withdrawals.

“After that, who would dare to use the digital yuan? »