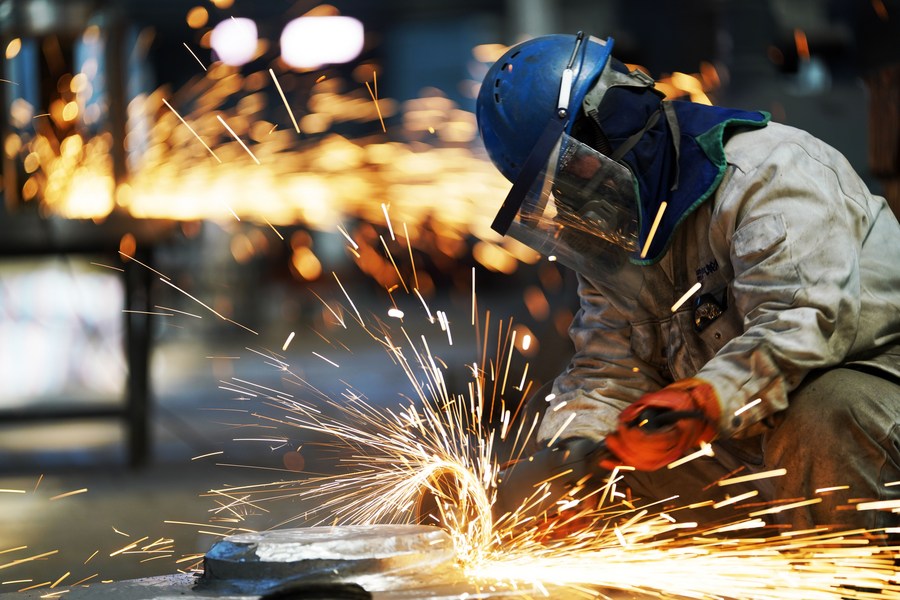 A worker is busy in a workshop of Harbin Turbine Company Ltd. of Harbin Electric Corporation in Harbin, northeast China’s Heilongjiang Province, May 7, 2022. (Xinhua/Wang Jianwei)

BEIJING, May 26 (Xinhua) — Is the threat of global stagflation becoming real? Can the Chinese economy withstand the mounting downward pressure and continue to fuel a more sustainable global recovery as it did during the 2008 global financial crisis?

These concerns were raised by world leaders, business moguls and academics at the 2022 annual meeting of the World Economic Forum (WEF) amid the whirlwind of challenges such as the COVID-19 pandemic and the clouding Ukraine crisis. an already lackluster global economy.

In such a context, the Chinese economy has also encountered headwinds in recent months as the resurgence of COVID-19 has weighed on some metropolises such as Shanghai and Beijing. To overcome these challenges, the Chinese government has tried to effectively coordinate epidemic control with economic and social development.

The Qiushi Journal, a flagship magazine of the Communist Party of China Central Committee, published an article by Chinese President Xi Jinping last week, in which he said that since the 1990s, China has successfully responded to major tests such as as the Asian financial crisis, the international financial crisis and the COVID-19 pandemic.

Xi also acknowledged the risks in China’s economic and financial sectors, but said they were under control, while expressing confidence in the sustainable and healthy development of China’s economy.

Thanks to hard work, China is seeing a steady decline from its recent COVID resurgence. In Shanghai, after several months of a fierce struggle, the megacity of 25 million people declared on May 17 that all of its 16 districts had cut off community transmission. From now on, the metropolis is gradually reopening businesses, with a resurgence largely under control. 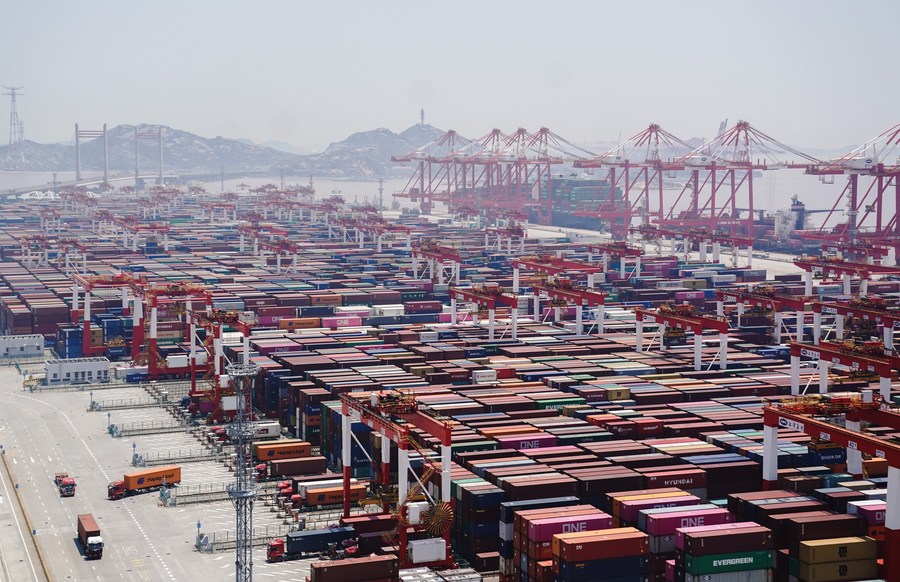 Photo taken on May 17, 2022 shows a view of the Shanghai Yangshan deep-water port. (Xinhua/Ding Ting)

To revive production and support growth and confidence, the Chinese government acted quickly. It rolled out a broad set of targeted measures, including increasing tax refunds, providing grants to encourage employment, and extending financial support to micro and small businesses.

On May 15, a ship loaded with more than 4,000 electric cars produced by Shanghai’s Tesla Gigafactory left for Belgium. This is the second Tesla car export from Shanghai since the factory resumed production on April 19.

The four factories of the American manufacturing company 3M in Shanghai have also resumed production.

“It’s so wonderful to be back at this familiar store and reconnecting with the community and customers by brewing cups of coffee,” said Sheng Li, Starbucks store manager on Shanghai’s Huaihai West Road.

As of Monday, nearly 20 Starbucks stores in Shanghai’s 12 districts had reopened, covering downtown and suburban areas. Sheng said she is fully occupied these days, as expected.

Despite downside risks, China has the policy space and capacity to respond to economic shocks, the World Bank’s chief economist for East Asia and the Pacific told Xinhua. , Aaditya Mattoo.

In a recent press release, Fu Linghui, spokesperson for the National Bureau of Statistics of China, said that “the fundamentals of the Chinese economy remain unchanged. The general trends of economic transformation and modernization and high-quality development remain unchanged.”

Despite the downside risks, the Chinese economy remains resilient with a very large market, complete industrial and supply chains, and huge domestic demands.

China last year announced its victory in building a moderately prosperous society in all respects. The country has the largest middle-income group in the world – 400 million people, offering huge potential for its own businesses and those of others.

Moreover, it is the only country in the world to obtain all industrial categories listed in the United Nations industrial classification. Among the world’s top 500 industrial products, China ranks first in terms of production with over 220. 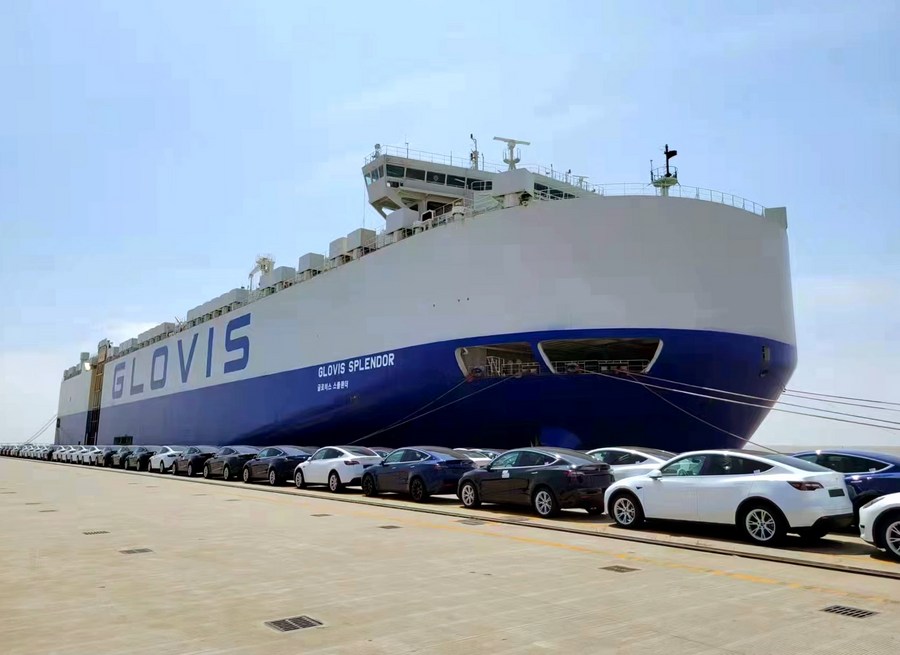 A ship is loaded with electric cars produced by U.S. automaker Tesla’s Gigafactory in Shanghai, before departing for Slovenia from a port in Shanghai, east China, May 11, 2022. (Xinhua)

At the height of the pandemic, it was China that quickly brought the disease under control and restored previously disrupted global supply chains. According to Bloomberg, China has ensured “that everything from iPhones and Teslas to fertilizers and auto parts continue to flow to the rest of the world.”

“China is the world’s largest manufacturer with the most comprehensive and resilient supply chain system, which has helped China’s economy recover rapidly after the outbreak of the COVID-19 pandemic,” said Jerry Zhang, CEO of Standard Chartered Bank (China).

China is also building new fundamentals for future growth. The country’s drive to enhance its innovation capabilities provides strong support for promoting a new development paradigm and achieving high-quality development, which are key elements of “Xiconomics”, the philosophy economy of the Chinese president.

China’s economy has excellent potential and resilience, said Swiss banker Fiorenzo Manganiello, adding that China can withstand downward pressure and risks and has the confidence to stabilize the macroeconomic market, which is “very important for global investors”.

These figures testify to how closely China and the rest of the world are linked in terms of trade and commerce, as well as the need to promote shared development on a global scale.

As Xi noted, China’s growth aims to achieve common prosperity at home and shared development beyond its borders.

To achieve common prosperity, China must first “make a bigger and better cake” through the joint efforts of its people, and then divide and distribute the cake properly through rational institutional arrangements, Xi said in his statement. article on Qiushi.

China is leading its economy with a new development philosophy and paradigm that features innovative, coordinated, green, open and shared growth, and gives more weight to the domestic market while developing the overseas market. 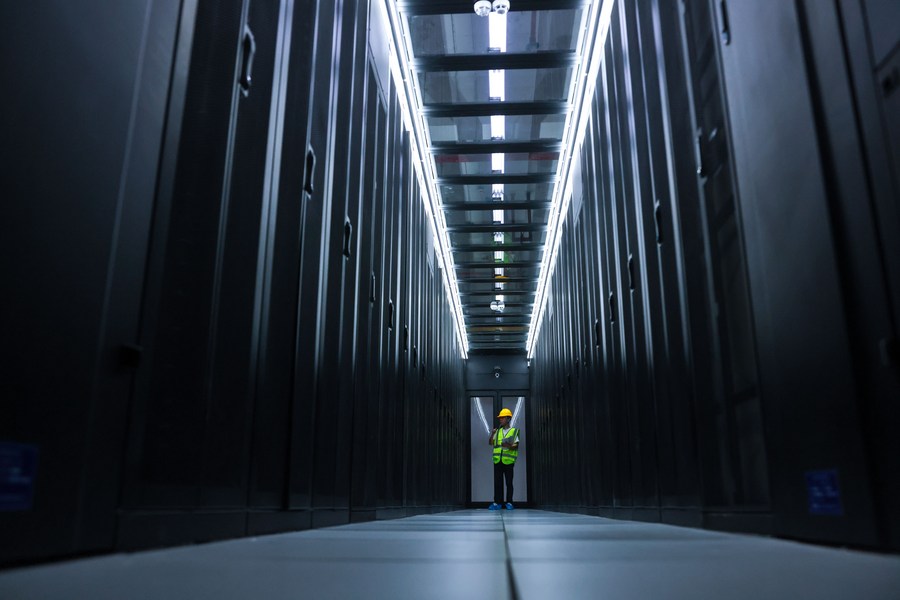 To turn global awareness into collective action, China has translated Xi’s vision for common development into cooperative frameworks such as the Belt and Road Initiative and the Global Development Initiative that have won the support of countries and organizations around the world.

Addressing the 70th anniversary conference of the China Council for the Promotion of International Trade and the World Summit for the Promotion of Trade and Investment, Xi stressed China’s commitment to the multilateral trade regime centered on on the WTO, pledging to “ensure the security and stability of the global industrial market”. and supply chains, and making the cooperation ‘cake’ bigger to allow development gains to better benefit people in all countries. »

Xi’s renewed commitments to global cooperation have injected a dose of certainty into this uncertain world.

Standard Chartered “is very optimistic about China’s long-term development prospects and will continue to invest in China,” Zhang said, citing the group’s decision to invest $300 million in China-related businesses over the past year. of the next three years.

Manganiello, the Swiss banker who hailed the Belt and Road Initiative and the regional Comprehensive Economic Partnership as “powerful engines for the recovery of the global economy”, also said he believed China would continue promote globalization and regional economic integration.

In the face of the COVID-19 pandemic, China’s economic growth is facing short-term challenges, but the Chinese government is taking measures such as expanding domestic demand, reducing export dependence and the cultivation of high value-added industries to ensure economic growth, the WEF said. President Borge Brende.

“So in the long to medium term, I’m quite optimistic for the Chinese economy,” Brende added. ■